Sadar Bazar Jame Masjid , Imphal, Manipur is an age old and historic Masjid  established in the year 1896 AD. It is located on the eastern side of the Nambul River and western side of Masjid Road, Poana Bazar of Imphal City, Ward  No. 4 Imphal Municipal Corporation. It was constructed on the land measuring an area of 0.0800 Hectares covered by C.S. dag No.100 of 17/A Khwai Village,Lamphel Sub-Division, Imphal West District.

In the year 1896, one Mohammed  Farid Khansaman who came from U.P. requested his Boss the then Political Agent of Manipur to donate a piece of land for construction of a Masjid in Imphal Town as there was no masjid for the Muslim employees, business community in Imphal Town area. The then Political Agent granted a plot of land for construction of the Masjid in the same year and Md. Farid constructed a temporary katcha building with Tent roofing for some time. After retirement, Md. Farid left for his home, one business firm named Hayad Ali Aas took the responsibilities of constructing a semi pucca building and maintaining the masjid. The firm served for a long period as Mutawalli upto the year 1922. Thereafter, another firm named Zuman Mia-Din Mohammed took the charge the office of the Mutawalli for about 20 years from 1922 to 1942.When the World War-II broke out and Imphal was bombed by Japanese Forces in 1942 , the firm Zuman Mia-Din Mohammed left Imphal. To take care of the Masjid , the local residents of Hafiz Hatta formed a Committee comprising  eight members namely, Alhaj Abbas Khan as Chairman, Md. Abdul Ghani, as Secretary,  Md. Abdul Qadir, Obedullah, Ramjan Ali,  Abdul Rahman, Chand Khan, Mohamd. Kasim as Members.

Development of the Masjid

During the World War-II, when Imphal was bombed, the masjid building was substantially damaged. After the war was over, the Masjid Committee demanded compensation from the Government. When the compensation was about to be paid, one party called Anjuman from Bombay filed a case in the Court of the Political Agent. The Political Agent, after having examined the records of both the parties, decided the case in favour of the Masjid Committee. With the compensation amount the masjid was repaired.

In 1965 the Masjid was re-constructed with  pucca structure and expanded its area to accommodate more namajis.

In 1970, the Masjid was expanded further vertically by constructing  1st floor.

In 1974, 6(six) stalls were also constructed in front of the masjid to prevent misuse by public as urinals and garbage dumping.

In 1989, the flooring of the ground floor was raised by about one foot in order to prevent the seepage of water from the underground water.

Due to increase in number of Namazi and the current condition of the Masjid wasn’t very suitable. So the Managing Committee discussed about building a new Masjid after consulting some experts it was decided to demolish  the old Masjid and re-constructed a four  storied  Masjid building with a capacity of 500 people each floor and a total of 2000 people. The construction works  began on 9th October, 2000. The process of construction took more than 19 years due to constraint of fund. Now the construction has been completed in 2018-19 excepting finishing works  3rd & 4th . floors.

4(four) domes and 6(six) minarets adorned the top floor which was completed in 2019.

Construction of a Ladies Prayer room having 20 capacity with attached waju Khana and bathroom has been constructed in the 1st Floor and in functional since 2006.

An Imam Office with attached Library Room has also been constructed in the 2nd Floor and is functional.

On the 3rd floor of the Complex, a conference hall with a capacity of 150 people has been constructed and functional since 2008. 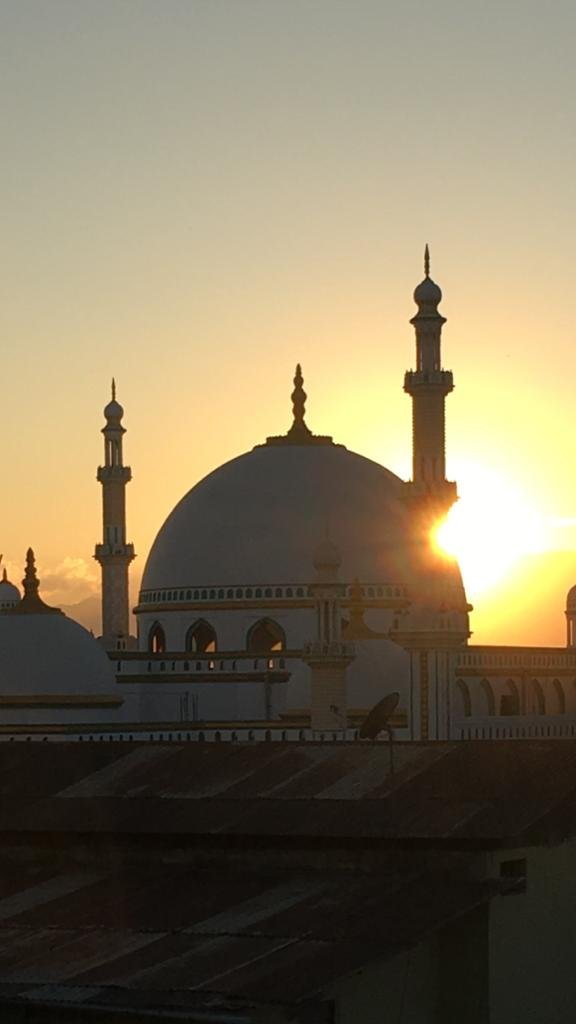